Voicepk.net
Home Our Stories Islamabad Emerging From The Lockdown With Infections On The Rise 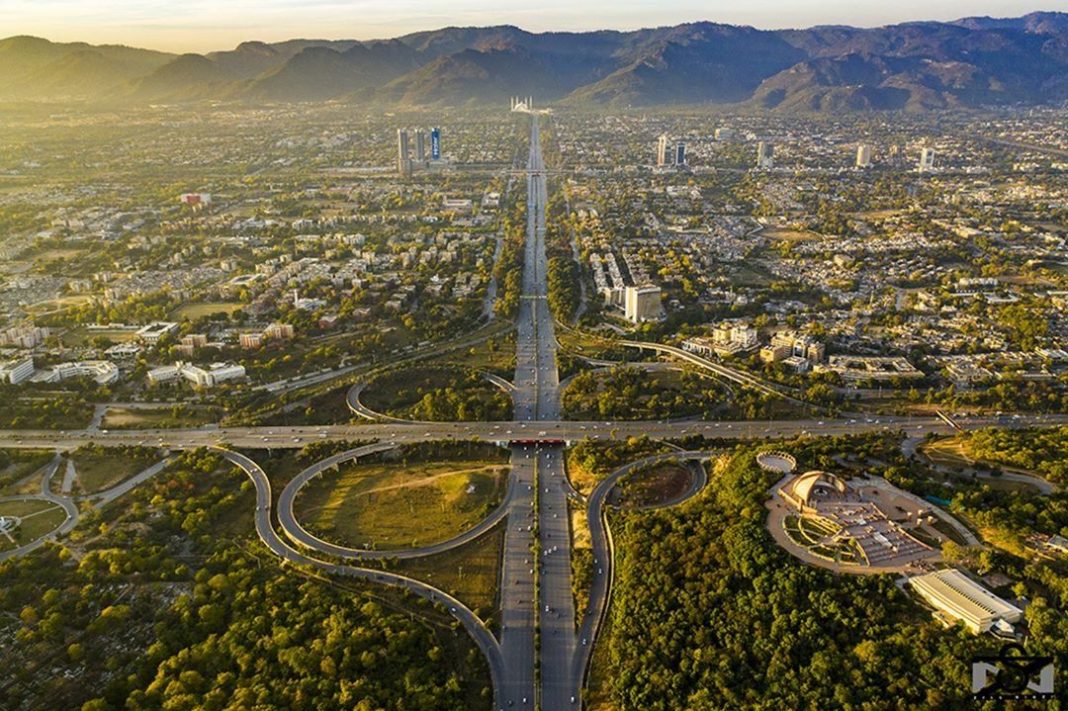 The government eased restrictions on Pakistan’s partial lockdown claiming that by extending it, the poor would starve. But as soon as businesses opened, people from the higher and middle-income bracket groups were flocking to clothing stores, who are holding sales just ahead of Eid holidays.

“Even after a week of ‘ease’, many of Islamabad’s labourers remain stranded on the footpaths of F-7’s famous Rana Market”

In Islamabad, the sudden suspension of Mayor Sheikh Anser Aziz on charges of corruption was criticized by those who claim that the capital will now be devoid of an elected, public representative during a time it needs a local representative the most.

ARE STORES IN ISLAMABAD FOLLOWING THE SOP?

Whereas some larger stores in areas like F-6 and F-7 have managed to implement SOPs to an extent, others in congested markets like Aabpara in the G-6 sector of Islamabad that are usually crowded have not, as it’s expensive to adopt. Aabpara is now as crowded as it was before the pandemic hit Pakistan. 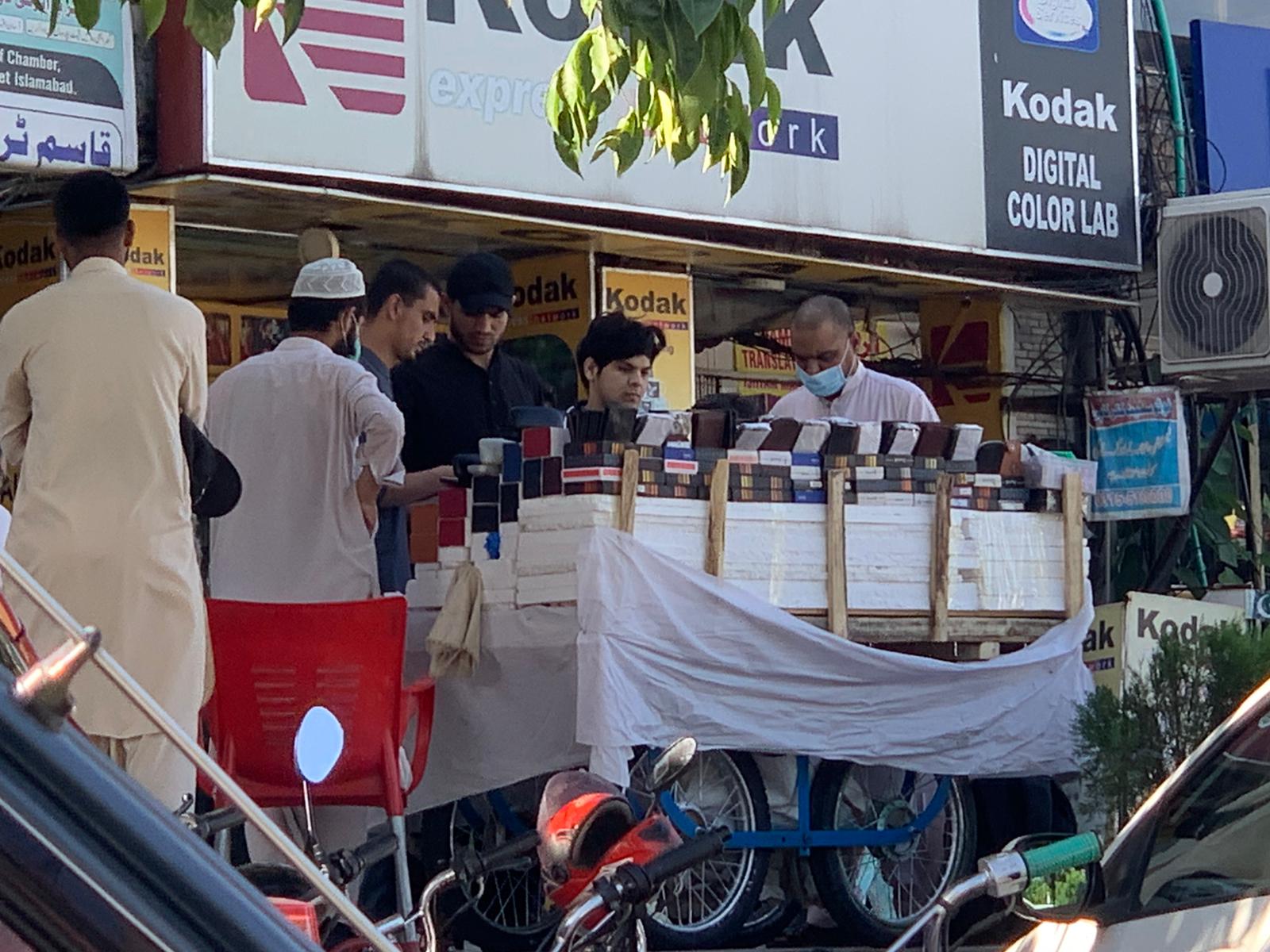 Even though some shops were sealed for gross violations of SOPs, many remain open to customers who walk around nonchalantly in close proximity to one another. While some customers are wearing masks, a lot of children have not done so. Many have shrugged off requests of wearing masks, saying “life goes on”. 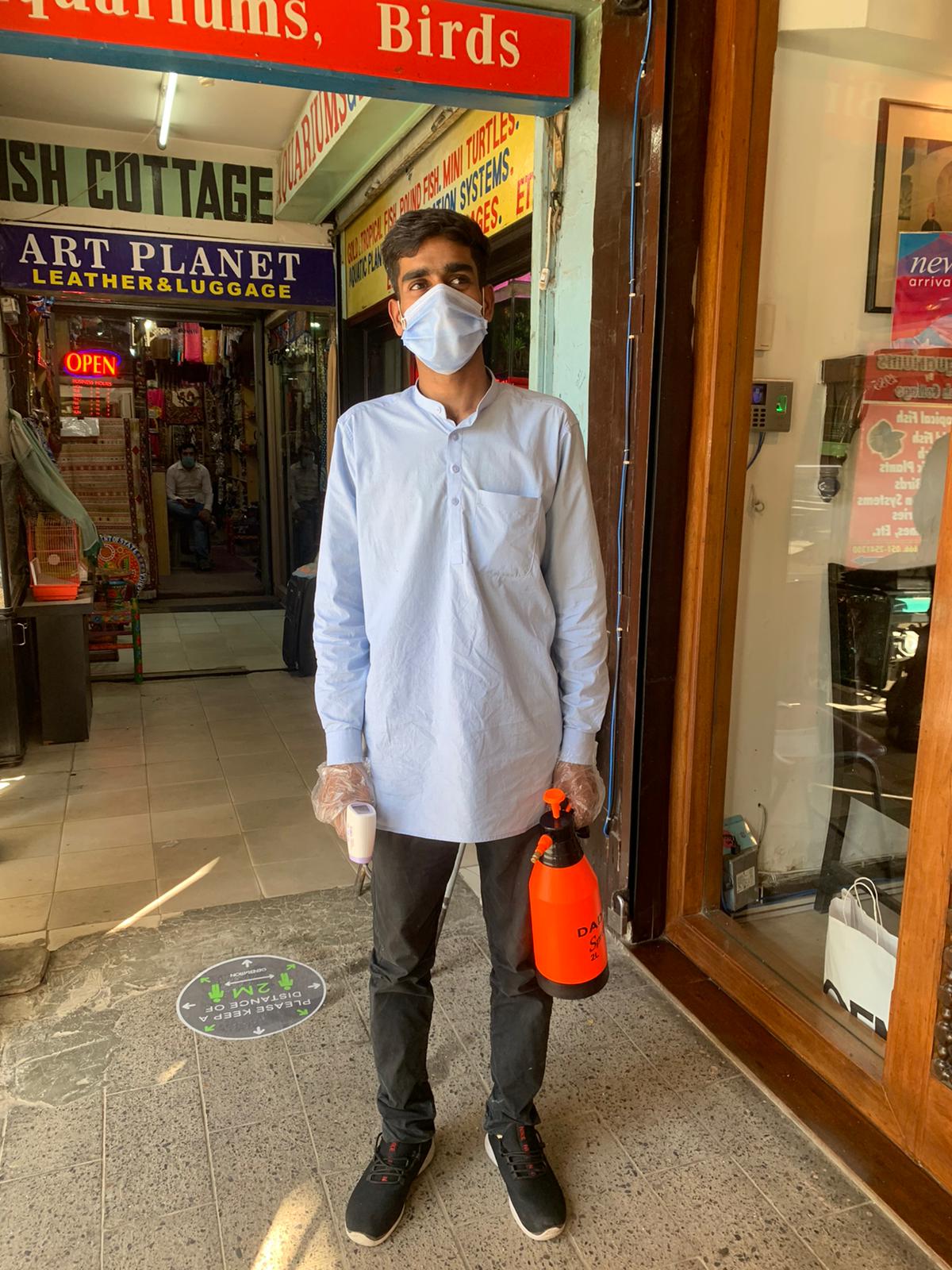 On Friday, 15th May, a huge crowd gathered in G-6 for Youm-e-Ali processions despite a government ban on large gatherings under section 144. Although police officials were present to block the roads, nothing was done to disperse the crowd.

THE VIRUS RUNS THROUGH ISLAMABAD

While Islamabad, a city nestled amongst the Margallas seems calm, with life going on as usual for the resident, the infections have multiplied. The number of cases has shot from 365 to 1138 just over the span of two weeks, with 72 people affected in sector I-10 alone and quickly spreading to I-8 and G-6 where the total numbers are 42 and 40 respectively. Even though 151 people have recovered, 9 have died, succumbing to the virus. The Pakistan Institute of Medical Sciences (PIMS) reported the first death of a healthcare worker, Zafar Iqbal, on Monday 16th May.

“Residents of I-10, complain every day more than 150 people gather to fetch water from a tanker due to unavailability of water in their homes”

According to Chief Commissioner of Islamabad, Amer Ali Ahmed, the spike in the number of cases in the city is not necessarily due to local transmission but is a result of increased testing capacity. So far, the prime carriers of the virus are those who have traveled from abroad and infected their families. According to Amer Ali Ahmed, it will take 2 or 3 weeks before his team can decipher whether the ease in restrictions has put more lives at risk. Until then, they will continue to carry out rigorous testing and monitor all public spaces for the implementation of SOPs. 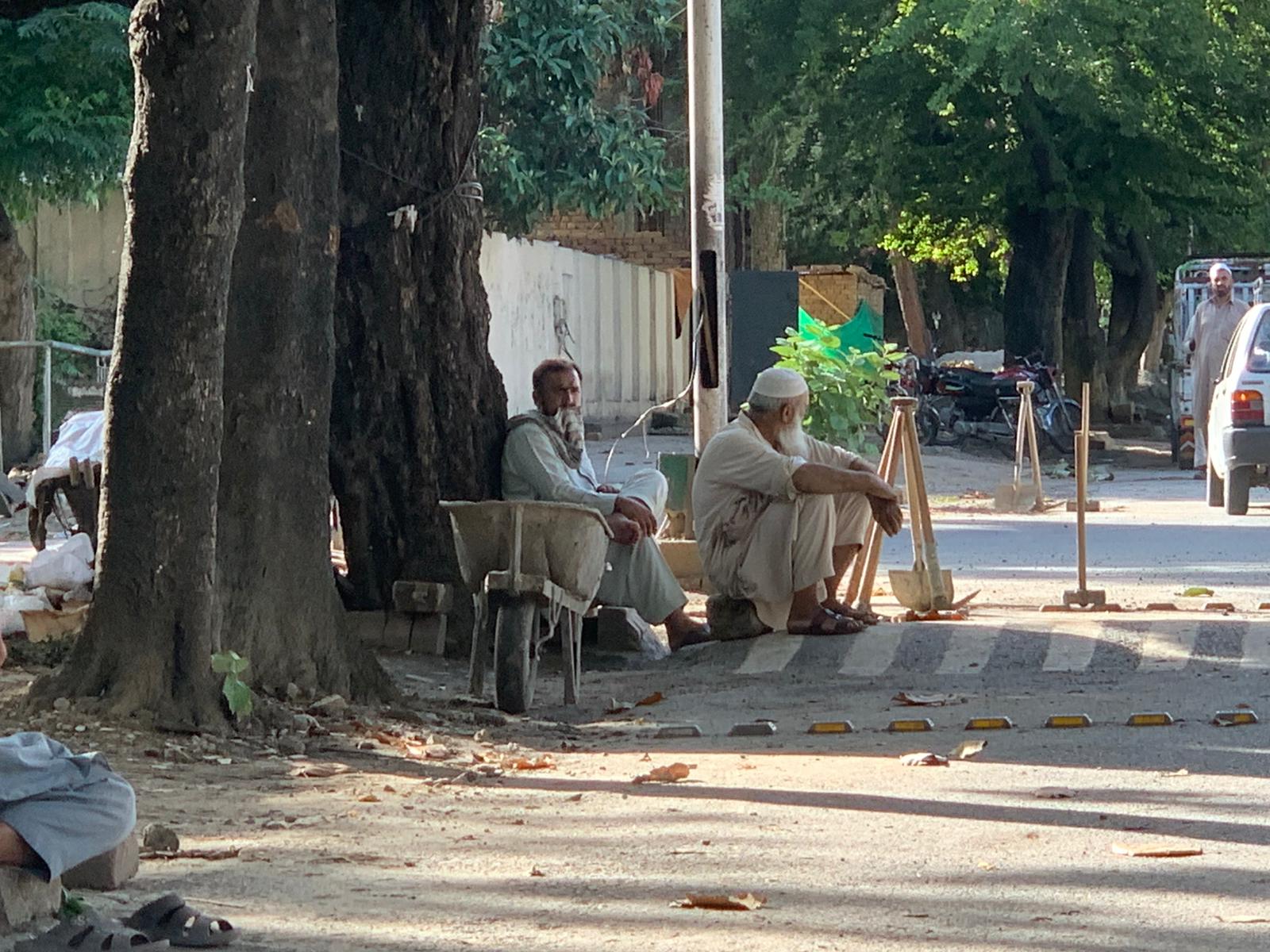 Even after a week of ‘ease’, many of Islamabad’s laborers remain stranded on the footpaths of F-7’s famous Rana Market, sitting idly with their tools, waiting to be put to work. They claim that they have been out of work ever since the lockdown was first imposed, many have even returned to their villages as they have lost hope that they will find work.  “What they tell you on TV are all lies, no one is ready to employ us right now”, one of the laborers told Voicepk.net.

SHORTAGE OF WATER IN I-10

DOCTORS TO THE RESCUE

As infections multiply and both public and private hospitals reach their capacity, some young doctors have taken the matter into their own hands and started a movement called Ventilators for Pakistan. The initiative was taken by Dr. Rabail Tariq and Dr. Sabah Akhtar, both of whom have lost their loved ones due to a lack of critical care facilities in Pakistan. 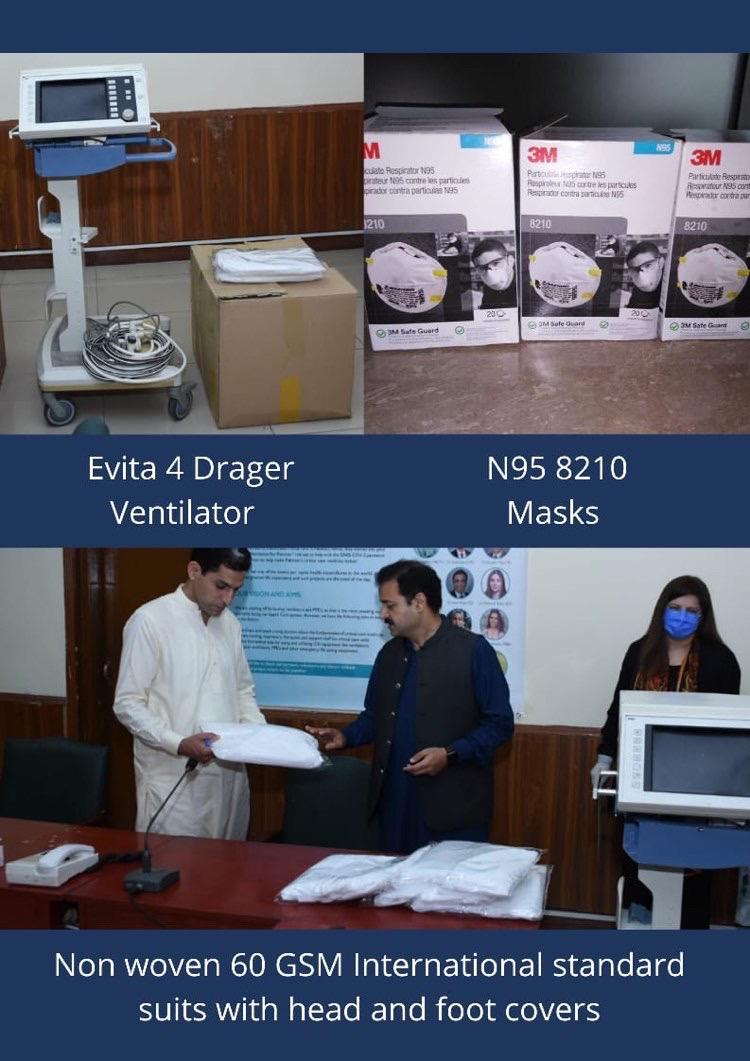 While speaking to Voicepk.net, Dr. Amna Pirzada, one of the volunteers for VFP said, “the goal is not just to make more ventilators available to public sector hospitals, but also to help train staff and improve overall critical care”. So far, they have managed to procure 3 ventilators and donated one to Holy Family Hospital, Ayub Teaching Hospital in Abottabad and at Saidu Teaching Hospital in Swat each.

Dr. Pirzada felt that this movement was a long time coming: “As doctors in Pakistan, we’re all aware of the limited critical care facilities we have. It’s unfortunate, but even some of the biggest public sector hospitals in major cities have a handful of ventilators which means they already can’t cope with patients that need ventilators. Private sector hospitals, while equipped, are just not affordable for a common citizen. And now with this pandemic and the lack of facilities from before, it’s a recipe for disaster”. 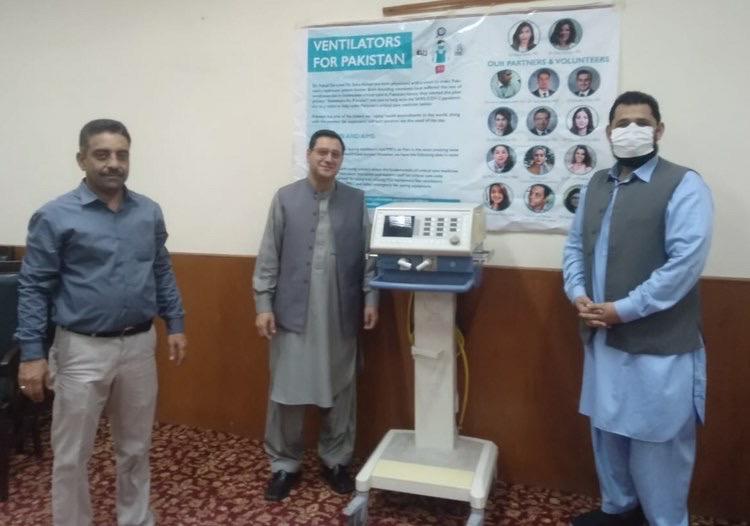 The team at VFP have bought refurbished American/German ventilators till now, which cost between 8-12 lacs each because buying brand new ventilators are too costly. These ventilators are tested by the team and donated. “Unfortunately, due to the rise in demand, vendors are hiking up prices, but we’re still working to find good ventilators at reasonable prices in the future”, Dr. Pirzada told us.

WHO ARE THE TIGERS?

The Prime Minister’s promised Tiger Force finally became operational on May 16th, according to DC Islamabad Hamza Shafqaat. Their tasks include: implementing the SOP, helping the poor, collection of data, and spreading awareness. But the question remains, who are the ‘tigers’ and what are the criteria for their selection? According to some sources, many of the members of the Tiger Force are recommended to the administration by the PTI office bearers and government functionaries. However, with the easing of the restrictions, the worst is over and it was the people who helped one another in difficult times and long before the Tiger Force even became operational.

“According to some sources, many of the members of the Tiger Force are recommended to the administration by the PTI office bearers and government functionaries”

With the government vying to open up the economy without a plan to ensure safety, it is apparent that the public is now on its own to navigate this crisis. Unfortunately, in the absence of leadership, no amount of public/online shaming seems to be stopping people from holding back from this year’s Eid shopping.