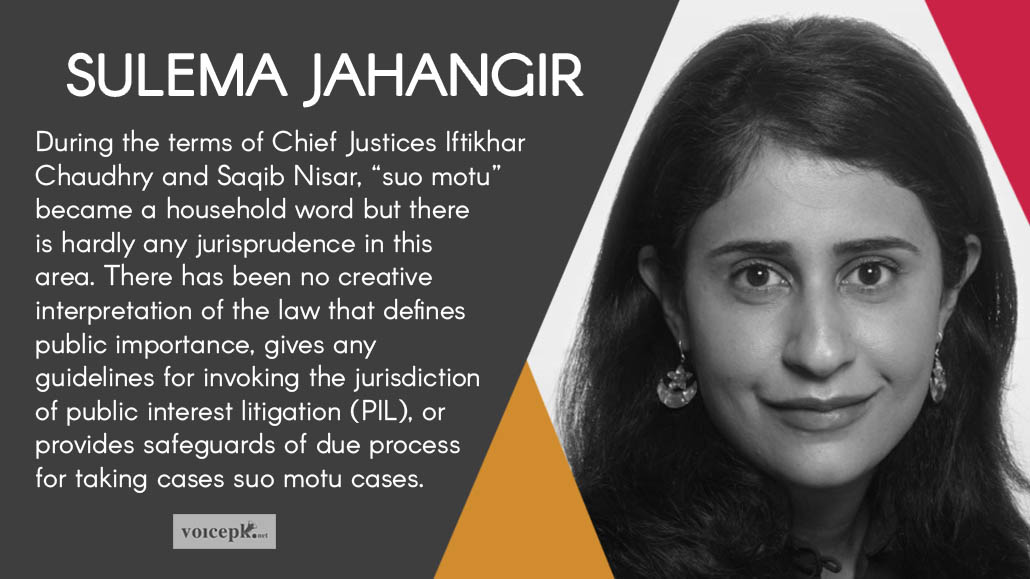 On Monday while hearing a suo motu case on the government’s measures to curb the spread of coronavirus Chief Justice Gulzar Ahmed roundly criticized the PTI led government and commented that the Special Assistant to the Prime Minister on Health Dr. Zafar Mirza should be dismissed. This is the first suo motu case taken by Chief Justice Gulzar. Suo motu powers emanate from Article 184(3) which empowers the Supreme Court to enforce Fundamental Rights on a “question of public importance”.  Following the restoration of the judiciary in 2007 the use of suo motu has ebbed and flowed with the personalities that occupied the top office. During the terms of Chief Justices Iftikhar Chaudhry and Saqib Nisar, suo motu became a household word but there is hardly any jurisprudence in this area. There has been no creative interpretation of the law that defines public importance, gives any guidelines for invoking the jurisdiction of public interest litigation (PIL), or provides safeguards of due process for taking cases suo motu cases.

“Suo Motu is hardly used in most common law countries and very rarely in matters of executive decision-making.”

PIL is a valuable tool that the judiciary can use for the empowerment of the vulnerable and the disadvantaged, but it should neither become an “unruly horse” nor should be applied selectively. It is a tool to promote transparency, increase access to justice for those who are unable to directly petition the court, and to take up matters that are of public importance where fundamental rights are denied. Suo motu is a branch of PIL that further compromises due process of law guaranteed under Article 10 A of the Constitution since it requires no petitioner but enables the Supreme Court to take up a case of its own volition.

After all, it is not for the bench to run the business of the state or formulate government policy. This is the job of the electorate who are ultimately accountable to their vote-banks. Second, the apex court has supervisory jurisdiction and standard-setting responsibilities. It is not meant to function as a trial court. Third, the apex court is the court of last resort which means that once a decision is made there is no appellate forum that can be approached. Fourth, in suo motu the veracity of the news and the selection of what news item to take up is inherently arbitrary. Once a case is taken up, the details that emerge may paint a very different picture from what may have been initially conveyed. Fifthly, it is dangerous when suo motu is used to question commercial deals or economic policies versus a case where fundamental rights are being impeded and the persons affected are unable to bring a petition to the court for the reason of poverty, incarceration or some other disability. An example of this is the Darshan Masih case where a bonded laborer was being held captive or the case of missing persons in Baluchistan. And finally, in a country where there is a backlog of nearly 1.9 million cases, the top court should be using its time judiciously.

“The apex court has a supervisory jurisdiction and standard-setting responsibilities. It is not meant to function as a trial court.”

Former Chief Justice Justice Asif Saeed Khosa expressed that suo motu powers should be used sparingly and in December 2019 amendments were proposed to the Supreme Court Rules 1980 to regulate suo motu power. It was envisaged that the chief justice will take suo motu notice on any matter after consulting with two senior-most judges and the matter would be referred to a bench whose decision could be challenged through an Intra Court Appeal to be heard by a larger bench. In India, PIL petitions are screened by a PIL cell, following which matters are placed before the Chief Justice for assignment. The Pakistan Bar Council has resolved that suo motu powers must be regulated so that the trichotomy of powers is respected. However reportedly in February 2020 after a full-court meeting to deliberate on this, a consensus could not be reached on regulating this jurisdiction or giving a right of appeal in suo motu cases.

While suo motu powers may provide short-term popularity in some quarters, in the longer term the damage to the role and dignity of the judiciary is irreparable. Some examples from the past are far from inspiring: the Pakistan Steel Mills case, population growth, auditing and checking of bottled water, water shortages, state of government hospitals, contempt proceedings against elected members of parliament and disqualification of law-makers under Article 62(1)(f) on the basis that they are not “sagacious, righteous and non-profligate, honest and Ameen”.

The judiciary in Pakistan has had a chequered history of endorsing military rules, the hanging of elected leader Zulfiqar Ali Bhutto, inability to punish defiant military dictators, and using judicial power to sack elected Prime Ministers. With this backdrop, the role of the superior judiciary should not be to invite media scrutiny or popularity. Ethical justice may sound bountiful but it is arbitrary – something the law abhors – it is the routine application of rules that provides a stable and certain justice system. Taking the executive to task over government policies to curb a pandemic may please some – as in the past they have pleased others – but respectfully this is exactly the sort of interest that smacks of judicial adventurism, not judicial independence. We must not regress to the time when providing justice was at the pleasure of unelected kings and not as a matter of right of the people.

It reminds one of the Moghul Emperor Jahangir who reported in his memoirs: “After my accession, the first order that I gave was for the fastening up of the Chain of Justice so that if those engaged in the administration of justice should delay or practice hypocrisy in the matter of those seeking justice, the oppressed might come to this chain and shake it so that its noise might attract attention.” In the case of suo motu, our superior court judges not only have the power to provide a chain but also shake it themselves without, so far, any inhibitions.

The writer is a board member, AGHS Legal Aid Cell, and Voicepk.net _an advocate of the high courts, Pakistan, and a solicitor of the senior courts of England and Wales.