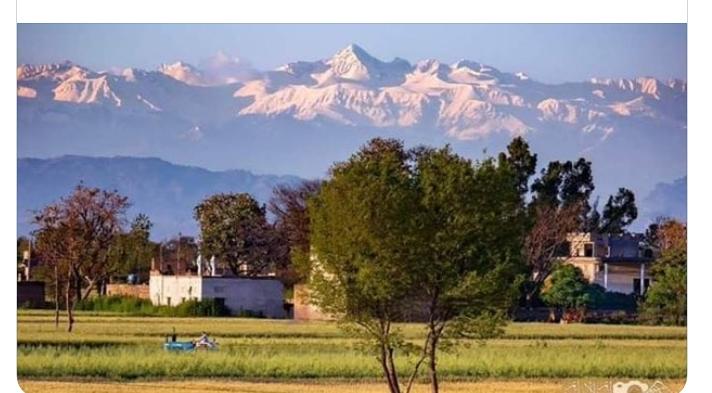 The citizens of Lahore are finally breathing in clear air this spring. From hazardous Air Quality Index (AQI) readings of above 200 in November, the AQI has come down to healthy levels of below 50. The skies have never been bluer – there are no vehicular emissions as the roads are empty, the smoke belching factories are shut down and even the polluting airplanes over the city have been grounded.

This is true not just for Lahore but for most of the densely populated cities of Pakistan as well. In Sialkot citizens can see snow capped mountains in nearby Kashmir for the first time in 30 years. Birds have come back to nest in gardens, butterflies and bees can be seen in abundance and it seems as if nature is finally starting to heal itself.

However, all this has come at a high cost – the COVID-19 pandemic is raging all over the globe. It is not known how long the lockdowns will last – or for this tricky virus to be controlled. The future is uncertain but this temporary respite for city dwellers has shown us that drastic change is possible.

With most cities around the world and, in some cases, entire nations under lockdown, satellites have detected a significant decrease in the concentration of a common air pollutant, nitrogen dioxide, which enters the atmosphere through emissions from cars, trucks, buses, and power plants.

Air pollution can seriously damage human health, and the World Health Organisation (WHO) estimates that diseases from exposure to ambient pollution – including stroke, heart disease, and respiratory illnesses – kill about 4.2 million people a year.

What can we learn from the response to the COVID-19 pandemic that will help us to clean up our cities?

According to the Advisor to the PM on Climate Change, Malik Amin Aslam: “Drastic reductions in air pollution and greenhouse gases is certainly one of the silver linings of the otherwise tragic Covid-19 episode. More than any other thing it has shown the extremely strong nexus between congested vehicle traffic and air pollution especially in urban centers and also the extremely quick turnaround that can happen as nature is given space to come back”.

He adds that: “It also shows that this is a problem which has a solution – and that is to reduce and minimize polluting vehicles or observing traffic free days. Nature’s come back has certainly given food for thought, as well as responsive action, to policy makers”.

Aslam explains that as we all fight through these difficult times, “a clean and green Pakistan is not just a fleeting luxury but an unavoidable necessity for our future survival as a human race”.

As a result, he has directed all the chief ministers to speed up and scale up the 10 Billion Tree Tsunami activities as an economic stimulus for the out of job daily wagers.

“Putting them on green jobs with dignity” is how he describes this initiative to help those who have lost their jobs due to the Covid-19 lockdowns.

Pakistan’s congested cities are plagued with not just toxic air pollution but also polluted water supply and over flowing garbage, making them increasingly unlivable as many environmentalists keep pointing out.

In November 2019, the Clean Green Pakistan Index was launched by PM Imran Khan, which aims to encourage competition amongst Pakistan’s cities over various indicators like access to clean drinking water, safe sanitation, effective solid waste management and tree plantation. It also encourages competition between 19 cities of the Punjab and Khyber-Pakhtunkhwa provinces on providing important services like waste collection and waste-water treatment.

The PM’s own home-town, Lahore used to be a green city with pure tap water and clean air, as he remembers it.

“Today you can’t breathe in Lahore… the worsening air pollution is threatening the lives of the elderly and young children. It is a silent killer and now Lahore’s pollution levels have reached those of Delhi, making it the second or third most polluted city in the world,” he notes.

He actively blames the previous government for not thinking about the adverse impacts of development and for cutting off 70 percent of Lahore’s green cover in the last 10 years to build roads.

But he emphasizes how his Government was committed to a “clean and green Pakistan”.

Malik Amin Aslam observes that the Chinese government had been successful with a similar competition amongst their growing cities.

“The introduction of quantifiable environment performance in China is what has brought about transformational change in their local municipalities,” he says. Aslam informs that around 35 indicators have been included in the Pakistani index and the project will be carried out with funding from the Agricultural Development Bank (ADB). The private sector will also be encouraged to invest in waste-water and solid waste management.

Dr. Kamran Ahmad, a professor from NUST in Islamabad blames congestion in cities being a result of the lack of proper public transportation systems and the easy availability of car leasing/financing, which has encouraged middle class families to own their own cars.

“Cars have become a necessity rather than a luxury,” he notes. “In addition, there are “no proper school bus systems”.

Before the outbreak of the pandemic, environmentalists in Lahore had called upon the government and private schools to introduce school buses to tackle the menace of air pollution in the city.

Attiya Noon, who works with WWF-Pakistan, says that Lahore has the highest rate of drop off and pick up cars per child in the world.

Meanwhile Dr Ahmad notes that the emergence of e-travelling with companies like Uber, Careem, Swvl offering rides and car pooling apps is a positive sign.

“All over the world, electric vehicles are on their way. But in Pakistan we need to make a proper plan for them so we don’t go the way of CNG cars”.

For now the government is too distracted by the pandemic to take any long-term decisions to permanently clean up air pollution in our cities.

According to Imran Khalid, a Research Fellow with the Sustainable Development Policy Institute (SDPI) in Islamabad, even as the number of dead from the pandemic continues to rise, there is an appreciation of the reduced pollution and its impact on the surroundings. “We can see it in our social media posts and news reports,” he says. “We can sense it when we step out, if we step out. But unfortunately this is probably just a brief hiatus, a detour if you will, in our race for development”.

In his view, the clear blue skies over our cities are just a temporary phase: “In a few months when the pandemic is eventually consigned to the history books, the world will revert to business as usual,” he says.

“Yes, there will be some of us who’ll call for a change but those voices will be set aside with a promise to think about the environment when we have reached a certain level of development.

The situation will only change once we collectively make a decision to change the way we think about development and growth. That will require prioritizing the environment and health of the planet and the people. It will require a sea of change in the way we perceive our relationship with the natural world.”