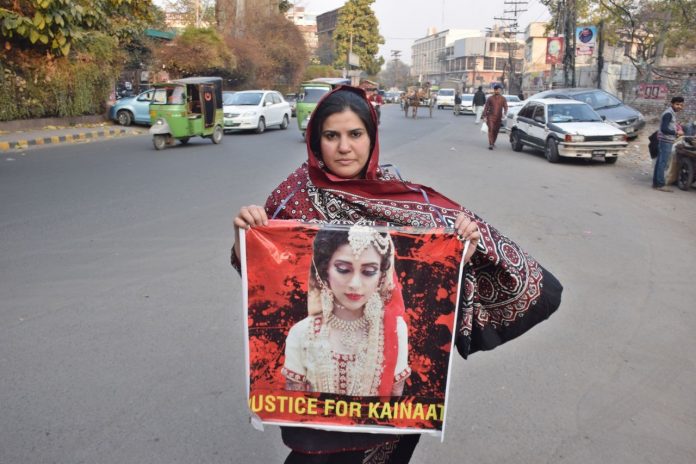 For Afshan Latif, the death of Iqra Kainat came as a grim foreboding at least twice before.
It was after the whole Kashana sexual abuse case had blown up, and Iqra became a sole witness, that her life became endangered.

“Two months after I had opened up about sexual abuse of young girls inside the shelter home, Iqra was removed from her own house and taken away to the Child protection bureau,” says the former superintendent of the Kashana Welfare Centre. “It was Dec 16th, 2019, and I knew why she had been picked up. I appealed to the Government and at so many other platforms but no one came forward to do anything.”

The second time when Iqra’s husband Abid called Afshan Latif about his wife being at the Edhi Centre, she appealed again, she says. “I came forward on TV and social media, everywhere, and I said this is the same girl who was a witness in the Kashana case. Again this had no effect. On Feb 5th she was found dead at the Edhi Home.”

Mysteriously, claims Latif, Iqra’s record before she was at Kashana was nowhere to be found.

Iqra Kainat was dropped off to the Punjab Child Protection Bureau when she was just a child, by her own drug addict father. After that he never came back. In 2015, she was shifted to the Darul Aman. (Around a year later in 2016, documents show that Iqra Kainat was shifted from Darul Aman to the Kashana Welfare Home.)

“Why is a young girl shifted from the Child Protection Bureau into the Darul Aman?” asks Latif, her eyes insinuating so much more. “The latter is only meant for those who have a police case. What was her case? No one knows.”

But Sarah Ahmed Director of the Child Protection Bureau says they had no reason to remove Iqra’s record.
“Iqra was here seven years ago and she only stayed for one and half year. After that she wanted to go back to her family. We also have no idea why she was put in the Darul Aman. But once someone leaves our home, we do not have any responsibility or link to the person.”

But Latif insists that Iqra was a danger to the authorities as she herself was abused and she knew everything inside out.
“Iqra had spent her whole life being sent from one shelter home to the other. She knew a lot of things,” she says. “Because she was groomed to be abused, she was also being treated like a “VIP”, given gifts and money. She was spoilt but by the end of everything she wanted out from this kind of life and told me she wanted to marry almost anyone just to get out of shelter homes,” Afshan says.

Only a few months into her marriage and Iqra was already having fights with her husband. Soon Afshan heard that she had ingested ‘washroom cleaner’ (acid) and that she was getting medical treatment for it. At least this is what Abid told Afshan.
“If she really had swallowed acid herself, when I met her, I could see she wasn’t in a dangerous state. She was getting better,” says Latif. “My question is all of a sudden how could she starve to death after that?”

Afshan has now resorted to protesting on the streets.
On February 27, she along with some others, including Zainab Ansari’s father Amin Ansari, and stood outside the Punjab Assembly to highlight that the death must be investigated.
Ironically Amin is also the ambassador of the Child Protection Bureau in Kasur.

A SUSPICIOUS DEATH?
Iqra was allegedly found dead at the Edhi Home in Township, Lahore. The girl was bathed and readied for her burial – until Latif says she arrived at the scene.

“On 5th Feb when I went to the Edhi Centre I was appalled at seeing how no one had bothered to find out why she had died?” says Latif. “If I had not gone there, the girl would have been buried without autopsy. I appealed to all and sundry including the Human Rights Commission of Pakistan who in turn pressurized the police to have her postmortem done. It was only then that they did the post mortem – 2 days after her death.”

What was revealed was some disquieting information. The girl who was otherwise medically considered fit and healthy as written in the postmortem, was said to have died of starvation. But even this was kept hidden until a week ago when Afshan Latif protested to such an extent that she was finally shown the report – and then asked to end her protests.

The PM report says that the organs have been sent for further testing to ascertain any kind of poisoning.

A representative from HRCP on condition of anonymity told Voicepk.net said that the situation raised several questions. “Why is there so much secrecy regarding the PM report? This is why Hina Jillani on behalf of HRCP had filed a petition concerning the secrecy of the issue, and also to address the system of such shelter homes which needs immediate and complete overhauling, and also to question why vigilance committees in the shelter homes were suspended.”

Latif has also claimed that several orphan girls had been wedded forcibly in five years and some of them had even gone missing. But she says these ‘weddings’ cant be found on paper. Neither were any of these girls ever sent out of Kashana. They had bedrooms there.

Three months after her posting as superintendent, Afshan Latif says she saw a man enter the main gate and go directly to the sleeping quarters of the children. She took the CCTV footage to the Deputy and Regional Director as well as Afshan Kiran Imtiaz the Director General.

“The next day on an emergency basis, the entire staff was transferred off to other areas away from here. The SP was made the OSD and made me SP. They promoted me from 17 grade to 18.

Minister Social Welfare Department, Ajmal Cheema and Ambreen Raza Secretary of the Department knew about this incident. So did Afshan Kiran Imtiaz, the Director General, but they covered it up. Whenever I asked them they said the matter is being investigated. That enquiry has still not been done.”

In an exclusive interview with Voicepk.net she says I had never taken any names of any ministers or anyone. “When I came in as SP I was put under pressure to marry off underage girls in the shelter and make bedrooms for them and to give some men the allowance of residence and employment,” she said. “In March I got to know that Afshan Kiran was planning a 3 storey apartment building there. The girls who were meant to get married, would not be sent to their in laws but continue living there. Kiran told me that all the arrangements including marriage references and bedroom expenditures would be done by Ajmal Cheema then Minister of SWD.”
She adds that Ajmal Cheema never told her anything directly, but Kiran Imtiaz would say these were his directives.

After the CMIT inquiry which went on from August 5 to 8, former minister Ajmal Cheema was given a clean chit. The inspection team, headed by Dr Raheel Ahmed, had claimed that there was no proper evidence to back Afshan Latif’s claims.

VAGUE NARRATIVES
The case filed by Hina Jillani will be heard on March 9. Till then, the narratives are vague and at certain points appear like internal fights.
But if what Afshan Latif says has even a ring of truth in it, the Pujab Ministers nominated in these cases will be in deep trouble. Voicepk.net could not reach Ajmal Cheema for his version till the filing of this report.

In any case, if not a case of child sexual abuse, this is at least a case of a girl’s mysterious death. Iqra Kainat died mysteriously – even a source connected to the postmortem proceedings has admitted. “We should question how it is possible to die of starvation in this city where anyone can give food out of charity?” he asks. “The Edhi shelter’s job is to feed people, then how is it that this girl died of starvation?”