When Taj Baloch said goodbye to his friend, he did not know it would be the last time that he would see him. Because Sajid Hussain Baloch, journalist and Chief Editor of Balochistan Times, has not been heard from since that night.

“We were together at 11 am on March 2, and then Sajid left for Upsalla city (Sweden) where he was staying while I travelled in the opposite direction for work,” says Taj. “I messaged him the next day, to find that his phone was off.”

Taj Baloch said that when he tried to contact Sajid, and no one answered, they went to his hostel to see what happened. They waited outside for about five or six hours but there was no sign of him.

At the same time, the Upsalla police refused to register a case of his disappearance. Taj explained that the police said they could not interfere in a person’s ‘private space’.

“In Sweden it is part of people’s lifestyle to “go off” into isolation – thousands do so especially in the winter and it is socially accepted here,” says Taj. “The police wanted to wait for a couple of weeks before they intervened.”

Hussain had been living in Sweden since 2017, and had applied for asylum here which was granted to him by 2019.

A VOICE FOR THE VOICELESS

Sajid is known as a seasoned journalist who regularly brings up the issues of his home province of Balochistan, including violation of human rights, etc. He belongs to a town Mand in the Kech district of Balochistan. After he studied at the University of Karachi, he joined The News International where he worked for some years with editor Talat Aslam.

As a writer too, Sajid always believed in writing openly about things. He was sensitive, astute, and politically aware. More importantly, he was also impartial and unprejudiced. In his personal blog titled “Sajid Baloch from Terra Incognita”, he wrote of an array of topics from Baloch art and culture to socio-political stories, as well as opinion.

As part of the Balochistan Times, Sajid did some ground breaking interviews of prisoners who had suffered torture, as well as other stories.

His wife Shehnaz Baloch says that Sajid never shared the kind of dangers he was facing, and always worked silently. “He never shared his thought process even with his family but in 2012 things got worse,” she says.

Obviously some of the stories did not sit too well with those who were being exposed. In September 2012, as he was working on reports of enforced disappearances, Sajid sensed that he was also being followed. Only recently he had exposed a drug lord Imam Bheel, who had also threatened Sajid’s cousin. Some time later, some men broke into his house in Quetta when he was out investigating a story. They took away his laptop and some other papers too.

In the same month, Sajid fled the country to Muscat, Oman.

In a heartrending memory, Shehnaz reveals that just before leaving Pakistan, Sajid had been working on a novel. After receiving threats, he emailed the first chapter of his novel to a close friend in the Middle East, asking him to share it with his daughter when she turned 18, in case he did not survive. (His daughter was just one year old then).

“When Sajid was granted asylum by the Swedish Government in 2019, we breathed a sigh of relief,” says Shehnaz. “We knew this country had great democratic values which is why we are asking again and again how is it that a journalist can go missing so mysteriously in a country like this?”

Sajid stayed in a number of countries before finally settling on Sweden. He went to Muscat, Oman, then to Uganda, and Dubai doing various kinds of work. He finally made his mark in Sweden, as a linguist.

“When Sajid came to Sweden, there was a department of Balochi here at Upsalla University, where an English-Balochi-English dictionary was pending since the past 17 years,” says Taj Baloch. “In a matter of only three months Sajid completed that dictionary leaving them so impressed that they offered him a Masters program there, which he accepted.”

After Sajid did not answer his calls, his friends in Sweden approached an NGO called Missing People, who floated his news and photo. It was only then that the police began taking the matter seriously and registered the case on the same date.

“Next week we went to see the police again,” said Taj. They camped outside till the investigating officer came and told them that they were trying to find him, and that going into isolation was normal. But Taj told the officer they were not from Sweden, and their people did not act like this.

“We need to know if our friend is alright,” he told her. “We won’t disturb his isolation, but we want some assurance of his safety and well-being. He was a known man, something could have easily happened to him.”

The family and close friends kept silent about the matter giving the police time. But after 26 days had passed and the police did not come forth with any information, on March 28, 2020, the news was released in a statement by the Balochistan Times which announced that they had finally decided to share the news that he had gone missing from Uppsala, since March 2, 2020, and that a formal case had now been filed with the Swedish police.

“As of today (March 28), there is no clue about his whereabouts and well-being. The police have not shared any progress in the investigations with his family and friends,” read the press statement. 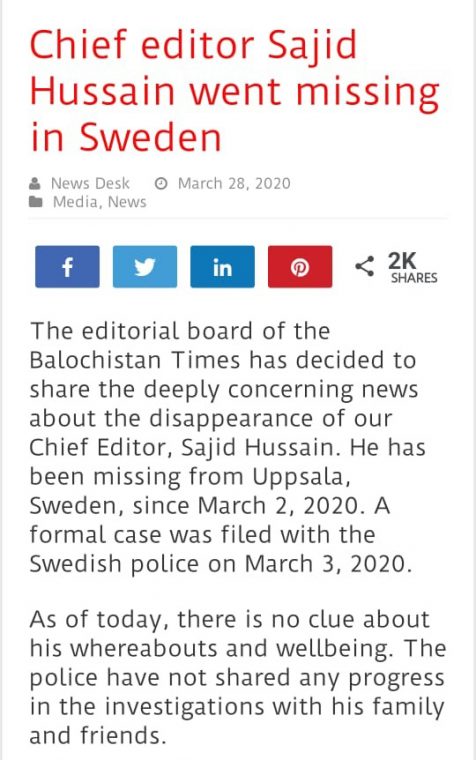 “It is highly disturbing for our family that Sajid Hussain is missing since 26 days from Sweden,” wrote Wajid Baloch. “We avoided to make his mysterious disappearance public so the ongoing investigation remains uninterrupted but so far the police has not provided any leading information about his whereabouts.”

Taj Baloch was one of the last people to have seen him. He says that because of his work at the Upsalla University, he had to travel a lot to and from Stockholm so he began looking for a place near Upsalla where he finally found a student room. After he took up his new room in Upsalla, Taj and Sajid met for the last time on March 2.

But a mutual friend said he had spoken to Sajid last at 2 pm, when Sajid said that he was getting his room’s key from the company office and he would call back later but he never did.

“It has been almost 30 days yet we still do not know what happened to him – is he dead or alive, who is involved, what was his last location, what was his last transaction, did he leave the city?” asks Shehnaz brimming with questions. “Even the NGO has asked us more questions than the police has. Swedish authorities must realize, this is not about just one person: Sajid was a voice for thousands of people living in and out of Balochistan.”

Meanwhile, Wajid his brother is trying to ward off sensationalist media reports about Sajid’s disappearance.

“People are misconstruing his disappearance and giving it their own meaning,” he says. “I am trying to handle the media – some of the mainstream Baloch media, some who are writing for foreign publications. They are trying to point fingers at whoever they believe are the suspects. But we as his family have not said anything, because truthfully speaking we do not ourselves know yet.”

As soon as the news of Hussain going missing broke, it spread fast. Several tweets popped up on Twitter.

It is very shocking news that Sajid Hussain, a renowned journalist, writer & chief editor of @BaluchistanTime has been Missing from Sweden on 2 March 2020. I appeal to the #Swedish govt to take effective measures in finding of him.@pressfreedom @IFJGlobal #FindSajidHussain pic.twitter.com/gDJB1xnBpP

Thoughts with @sajid_hussainb and his family at this difficult time. An absolute gem of a human being.
He has been missing without trace in Sweden since early this month.
I hope for the best and that he is located soon.
Urge int’l rights orgs to take this matter up seriously. https://t.co/HZlsRKtK1g

I request Swedish government to #FindSajidHussain. @sajid_hussainb is a friend & mentor and a senior Baloch journalist who went missing from Uppsala, Sweden on March 2, 2020. Since then we didn’t hear anything from him. Please relocate Mr. Sajid@SwedishPM @SweMFA @mikaeldamberg pic.twitter.com/J1vlDu1Guk

“We are afraid something has happened to him as a human rights activist,” says Johar in his video. “Because of his work on violation of human rights in Balochistan, it is a more concerning situation.”

He called for international media to raise the voice.

Worried about journalist Sajid Hussain (@sajid_hussainb) whose whereabouts in Sweden are unknown since March 3. He had worked at The News & Daily Times in Karachi. Our university friend. An excellent writer, decent human being. Hope Swedish authorities will #FindSajidHussasin pic.twitter.com/emqGe5ZoKa

“We request the Swedish authorities to look into this case and whatever the case is, to conclude it with evidence,” says Shehnaz Baloch. “We cannot digest how a person who was talking and laughing with his kids just a day ago, would vanish like this. He was so excited about us finally coming together and living as a family.”

Taj Baloch says that the Upsalla Police should have some clue about Sajid’s disappearance, and if it is hiding facts then this was very wrong.

“Whatever links people may try to make with Sajid, he was himself, a journalist, and he was a very honest journalist. Thousands of people looked up to him for that.”

In a story by Shah Meer Baloch, in a foreign publication The Diplomat, Sajid’s own words describe the situation with a haunting accuracy.

“The dead do not haunt me as much as the missing do. To tell the truth, I feel relieved when I hear about the discovery of a missing person’s body. But the stories of those languishing blindfolded in tiny, dark cells for years make me avoid dark, congested places.

“My prose betrays me if I try to write about any subject other than the missing persons. I am forced to think I should be trying to help highlight another case of enforced disappearance. At the same time, I’m bored of writing the same damn story for over 10 years: the story of this guy who was whisked away by uniformed men and is still missing. I want to write about happier things, about personal things. The problem is I can’t. Is that what you call PTSD?”