Voicepk.net
Home Our Stories Low-cost COVID-19 testing to be available in Pakistan soon 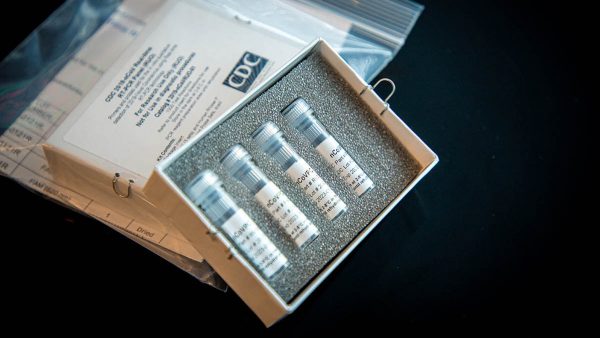 Professor Muhammad Idrees along with the team of university of Punjab’s Centre of Excellence in Molecular Biology has claimed to have successfully developed a low-cost kit to test likely coronavirus patients.

Testing for COVID -19 in Pakistan ranges from rupees 7900 to 10,000. However, Professor Idrees told voicepk.net that the sale price can come down and patients will only be charged the production cost of these diagnostic kits. The raw material used for these kits is worth only rupees 800-900 only.

“Government officials have called me for a meeting soon. They have inquired about the kits and they are going to import raw material for around 5000-1000 diagnostic kits in a week. Once they are available for use, then other companies will have to reduce their testing costs to as low as rupees 1000-2000” said Professor Idrees.

He emphasized that the information on how to make these kits is now widely available by global companies, after the virus outbreak in China and the U.S. Professor Idrees said students of virology and molecular biology can now easily make these kits.

“We started working on producing the diagnostic kit around 30th January 2020 and after the optimization of samples which took around a week, we were able to use a real time PCR-based method to detect infection which cost less than rupees 1000 even after going through all the quality assurance and safety tests during and after the production” – Professor Idrees, a renowned virologist and former vice chancellor of University of Hazara told voicepk.net today.

According to the claims of the Professor, the reason why the cost is so high is because it includes profits made by companies, distributors and labs.

Additional secretary health technical, Asim Altaf rejected the Professor’s claim saying “There has been no communication on the matter between us and the professor yet but in any case National Institute of Health will have to approve the diagnostic kits on the federal level first but there is no question on the possibility of these testing kits being produced at the costs claimed by the professor”.

National University of Sciences and Technology has also claimed to have developed low-cost diagnostic kits.

Ministry of National Health Services’ spokesperson, Sajid Shah told voicepk.net “Ministry has already made it clear that we are testing everyone for free and we have received information that there are certain laboratories who have testing facilities so we are negotiating with them to charge minimum for private testing services but we have yet to verify which are the credible testing labs of a proper PCR testing. We will then make these locations available to public because we want to ensure that there are no fake tests carried out in any way”.

Voicepk.net has also found out through well-placed sources that COVID-19 testing services will also be carried out in different hospitals of Pakistan very soon with kits produced by Roche, world’s largest biotech company.