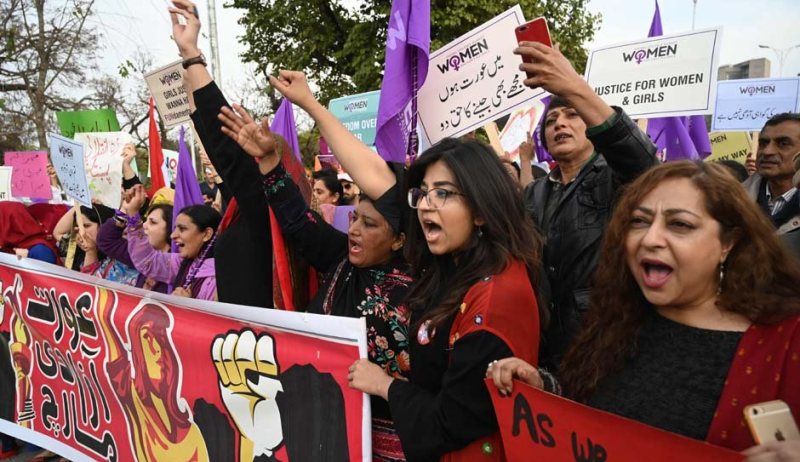 The Lahore High Court in its verdict today resolved that stopping Aurat March would be a direct violation of several fundamental liberties given to women.

The civil miscellaneous application filed by Mr. Munir Ahmed, represented by Supreme Court lawyer Muhammad Azhar Siddique, clarified that their intention was not to stop the rally but to prevent the display of vulgar signs and signs with an anti-men, anti-state, anti-Islam rhetoric.

The defense, represented by Advocates Saqib Jillani and Nighat Dad, denounced the petitioner’s allegation that the march is anti-state, and provided a comprehensive conduct list which attendees of the march are expected to adhere to.

However, they posited, the march is a movements for rights, and that any such placard that unintentionally or no displays hate speech will be condemned by the organizers.

Justice Mamoon Rashid expressed his reservations on self-incriminatory slogans, giving the example of “tu karay to stud, main karun toh slut” which was displayed during last year’s march and was one of the slogans which received much media attention.

He asserted that the Aurat March organizers do their utmost in restricting slogans, placards, signs, banners or speech that constitute hate speech, or promote indecency and immorality. However, he reiterated that under Articles 15 (freedom of movement), 16 (freedom of assembly), 17 (freedom of association) and 19 (freedom of speech) of the Constitution of Pakistan, there was no way Aurat March could or would be stopped.

A report submitted by the DIG operations earlier during the hearing assured foolproof security for the marchers against possible threats or miscreants. In concluding the petition, Justice Mamoon Rashid directed the government to fast track permissions for the organizers to conduct the march.

During the hearing, Advocate Muhammad Azhar Siddique’s assertion that women’s rights are already provided to them as per the Constitution prompted laughter from female lawyers and members of the public. Aurat March supporters condemned his use of the words “beauty” and “modesty” to describe women in the hearing.

Nighat Dad, founder and executive director of the Digital Rights Foundation, stated that the petition was a vain attempt to generate controversy and halt the march and was not a new tactic.

Aurat March 2020 will be held on the 8th of March, International Women’s Day.