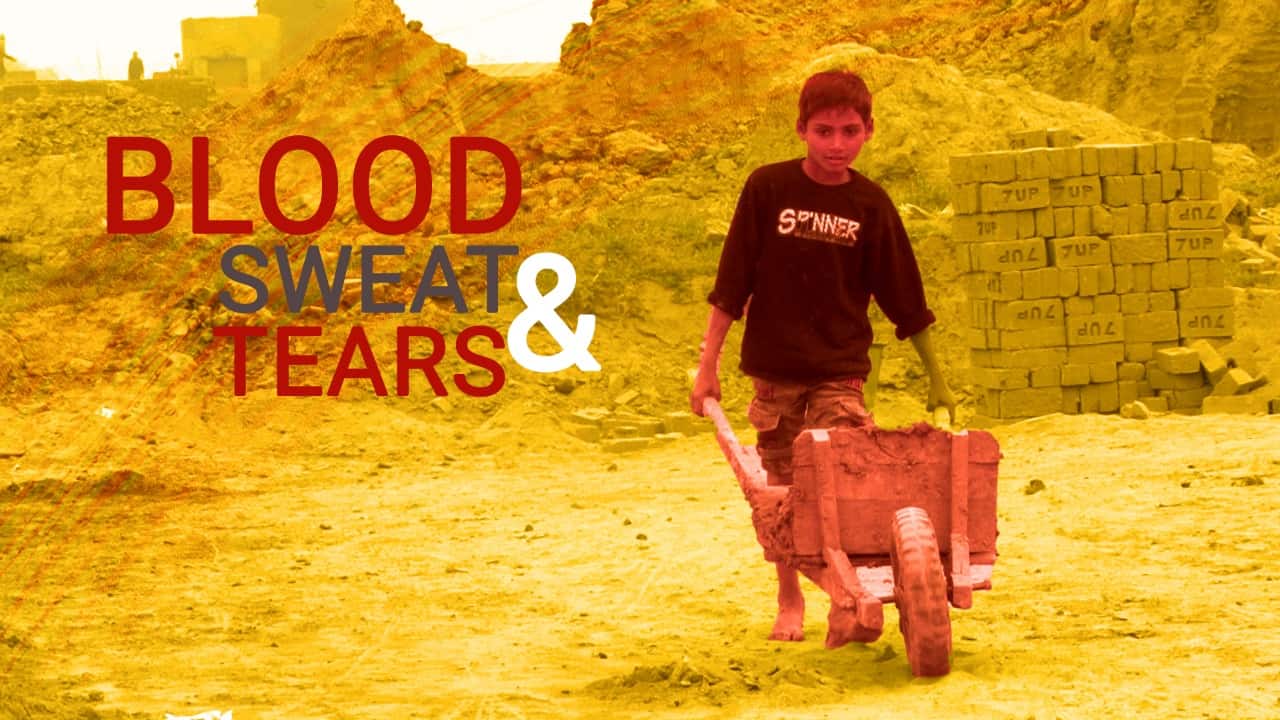 Rows of green bricks are laid out early in the morning, the workers toiling away in the biting cold since daybreak. Their bent bodies and twisted limbs mirror the drudgery of their lives

There is little room for hopes or dreams.

This brick kiln is one among the several surrounding Manga Mandi, just a 45 kilometer drive from the city of Lahore. A scattering of red brick structures around the kiln make up a tiny village. These are the workers’ homes but they might as well be prison cells.

As the noon sun finally breaks through the overcast sky, the workers dry out the bricks by turning them over from time to time. These will need to be baked in the fire until bright red.

The grind is the same during the summer months. Calluses and scars have marked the workers’ bodies, but there is no stopping. At least a thousand bricks a day must be made or the quota will not be met.

The Punjab Government has set the brick kiln workers’ minimum wages at Rs. 960 for 1,000 bricks. The market value of the bricks is around Rs. 10,000 – 9 times more than the legal minimum.

However, the workers do not even receive this meagre minimum wage after toiling all day in the sun and smoke. After a 16 hour work day, the labourer will only receive Rs. 250 – hardly enough for two full meals.

A Lifetime of Slavery

Sardara Bibi has been laying bricks for the past 16 years. She has still not managed to collect enough for a day off or for a medical checkup for an illness that has plagued her for years.

“I don’t have any money, I’m helpless. What do I do?” she said, clay caking her fingers. “If I had money, I would get medical help. The doctors say that I have ulcers and it might evolve into cancer. If I leave to buy medicine, I can’t look after my household. If I take care of my household, I can’t go buy any medicine.”

Sardara has 4 children. Her husband, a drug addict, abandoned them. Though she is sick, Sardara must moil every day as feeding her family is solely her responsibility. She has accumulated a Rs. 300,000 debt, having borrowed from the brick kiln owner to build a small house. She and three of her eldest children must pay back by working at the kilns.

Sardara is one among countless trapped in bonded labour, their entire lives pass by drowning in debt usually from the brick kiln owner.

Ashraf has spent 25 years at this kiln in bonded labour. He has a debt of Rs. 250,000, an amount he will never be able to pay back in his lifetime. But despite his hard work, he has suffered abuse by the kiln’s thekadars.

“I’m not happy here, how could I be? I’m working here out of desperation. If I don’t labour all day, they curse me, they beat me,” he said, wincing bitterly.

Ashraf’s daughter is married to another kiln worker – for him, even his succeeding generations will toil at brick kilns.

Not Even the Children are Spared

There are many children here. With wages so scant, and with debts piling up, parents are forced to withdraw them from schools and have them work instead. Akram along with his brother were the brightest of their class. Now they knead clay to pour into moulds, and lay the bricks out to dry. Some children, perhaps only a few, are afforded a childhood. Akash unfortunately was not so lucky.

“I don’t have a mother. My mother passed away. My father is at the thana because of a case my uncle lodged against him,” Akash related when asked where his parents were.

The Bonded Labour System (Abolition) Act 1992 attempted to bring bonded labourers into the legal and social mainstream, but it was never fully implemented. In 2016, there was another attempt with the Punjab Prohibition of Child Labour at Brick Kilns Act to outlaw having children under 14 years of age perform hard labour at brick kilns. However, despite the existence of laws, human rights violations run rampant at kilns.

A Spark of Hope

When Shamma Iqbal turned 18, she was married into a family of brick kiln labourers. For women, to marry a kiln worker is to seal her future as a fellow labourer. But because she had a high school education, Shamma knew and desired a different life than the one that was awaiting her.

“I used to weep,” she recalled. “My children struggled. They would work with their father in the wee hours of dawn and then later go to school. I slowly but surely managed to convince my husband to take up a job elsewhere. My entire family had to struggle but now we are seeing the fruits of having our children educated.”

Her efforts made it easier for Liaqat Javed, founder of the BRIC Pakistan, a non-profit NGO which aims to aid severely impoverished and oppressed bonded labour communities, to seek Shamma out and help her turn her life around for the better. Liaqat himself was a former bonded labourer who was fortunate enough to acquire an education to better not just his family’s life but the lives of many others trapped in bonded labour.

“I was born at a bhatta, my parents were bonded labourers. I was around 5 years old when I was also put to hard labour at the kiln,” Liaqat related. “My father managed to gain permission from the brick kiln owner to send me to school when I was 9 years old. When I completed my matriculation in 1997, I decided to try and work to end the plight of bonded labourers by teaching their children. That is how BRIC Pakistan found its footing; it officially became a registered NGO in 2003.”

Javed helped Shamma set up the very first school in the village and now her former students are helping an entire generation gain an education.

“I helped start the first BRIC Pakistan school. It was difficult in the beginning, we had to personally go to different brick kiln labourers and convince them to send their children to our school. We gained many students, a lot of girls who are now teachers.”

There are others who have managed to escape their shackles: Tasleem, Tabitha and Yashwa are amongst the few whose parents were able to acquire freedom, allowing them to have the childhood they deserved. But despite this, they still do not have enough money to find themselves a new home.

As the workers grind away, the chimney domineers above them all, blowing out thick black smoke. Will its dark shadow linger in their dreams forever? Will this black, smoldering cloud blot out the sun? Or will the Insaf Party voted into government on hopes for change implement laws so that the lives of Akram, Sardara Bibi and Akash can change?