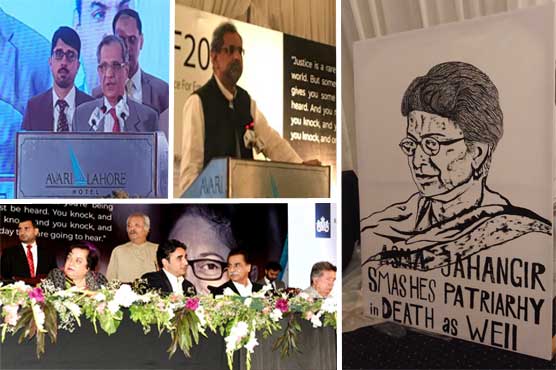 LAHORE: Speakers in a session at the Asma Jahangir Conference on Sunday prescribed respect for the 18th Amendment and provincial autonomy that it provides, curtailment of government expenditure, protection of human rights, strengthening of democracy and rule of power of ballot as the only means for the survival of Pakistan.

Anything to the contrary would further push the country into chaos, they said while speaking during the session ‘Strengthen the Legal, Constitutional Framework’ at a local hotel.

MNA Akhtar Mengal said less intervention of the Centre would strengthen the provinces. Islamabad should only deal with foreign affairs, defence and currency, allowing the provinces to deal with rest of the matters relating to them. The 18th Amendment empowered the provinces, but certain court decisions gave the impression that this empowerment was perhaps being diluted.

He mentioned the circumstances under which the country lost its eastern wing and complained of suppression of human rights and control over the ballot, media and judiciary at present.

ARTICLE CONTINUES AFTER AD
“Except for Balochistan, all provincial chief ministers are acting as chancellors as per the 18th Amendment,” he claimed and urged the need for giving equal representation to all provinces in the Centre.

Awami National Party Secretary General Mian Iftikhar Hussain regretted that his party was called anti-state despite the fact that it did a lot for the country, particularly against terrorism. “This Constitution was made by us, the same traitors,” he quipped. He said his party had been opposing those who abrogated the Constitution.

Her said people in KP were being subjected to injustice and anyone could be picked up without registration of a case. There was a need to make all institutions respect the Constitution. He demanded across-the-board accountability, asking whether it was only for politicians.

Speaking in another session on the post-merger situation of Fata, former PPP senator Farhatullah Babar said the Action in Aid of Civil Power Ordinance had been enforced all over KP after the merger, which was unjustified. This would mean establishment of internment centres all over the province. He added that conditions in post-merger Fata were worsening and the only way to move forward was to establish civilian administration in the tribal areas.

He said all political parties and people from all walks of life had demanded merger of the tribal areas. But there were problems that could be resolved only after introducing a civilian set-up there, he said.

KP Finance Minister Taimur Jhagra asked the speakers which tribal areas they wanted – the one where Taliban ruled or the one which was cleared of them. “Things have improved a lot. But we have not as yet attained perfection,” he added.

He explained that the government enforced the ordinance in the entire KP after the merger of the tribal areas to give legal cover to the actions taken during the pre-merger period. Governments were required to function in coordination with national institutions. The conditions for which the ordinance was promulgated still existed. “It is important to check whether this law is being misused or not. You need a strong army to defend the country,” he added.