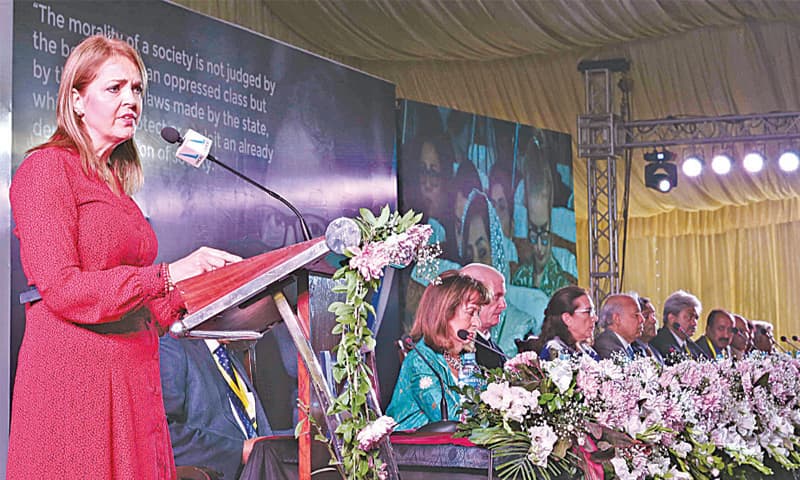 LAHORE: A session on ‘Electronic and Print Media (Freedom of Expression) in Pakistan’ on the first day of the Asma Jahangir Conference on Saturday started with a minute’s silence for the denial of entry to Pakistan to Committee to Protect Journalists Asia Programme Coordinator Steve Butler.

Mr Butler, however joined the session he was supposed to speak in personally via Skype. Speaking from Washington, he said press freedom was enshrined in Pakistan’s constitution and his expulsion will not affect his reporting of the country.

Mr Alam from Bangladesh said it was time for journalists to self-examine, as private media in South Asia had become a mouthpiece for the government. “There are staggering similarities across the subcontinent regarding attacks on press freedoms,” he said, adding that he was always in a state of resistance. “When I got out on bail, the idea was to silence me, but I will not be silenced. We have a regime that is elected, but we cannot even question them. The best resistance is to practice solid, fact-based journalism.”

Mr Bennett-Jones said Pakistani journalists are a robust community and have refused to bow down in the most difficult of times.

Ms Lamb said there were many who did not want to believe facts, but the job of a journalist should always be to bring facts to the forefront no matter how inconvenient they were for others. Journalists are squeezed financially and in many other ways, including threats and intimidation.

Speaking about the business model of media organisations, she said so far no one knew how to make money through the digital model. Paywalls were a huge challenge because readers were limited. “But, in today’s world, good journalism is expensive, and facts are important,” she said, adding that the New York Times and Washington Post had risen to the challenge in this context.

Mr Mir condemned the denial of entry to Mr Butler and criticised the way JUI-F chief Maulana Fazlur Rehman’s press conference was banned on TV. He claimed a day earlier, Pemra officials were interrogated over this censorship and at first they denied issuing any instructions, but when probed further, they “apologised” for it.

“Those behind restricting freedom of speech are the same people who did not let Mr Butler enter Pakistan. Frankly, it has only embarrassed Pakistan in the world. First, Zardari was banned from being aired because he was under trial; then Maryam Nawaz because she was convicted. Now, for Fazlur Rehman, no reason has been given,” he added.

Mr Almeida said democracy was one of the most basic rights. “If you’re talking about media freedom and fundamental rights, it’s the courts that have to protect the people and enforce those rights.”

He also spoke about the treason case he faced in the Lahore High Court, saying it was surprising that he found out about his arrest warrants and placement of his name on ECL through someone’s message without even receiving a court notice. “Without the courts acting as buffers, guardians, protectors of fundamental rights, it might not be possible for private, small organisations to withstand onslaught of state.”

The first day of the conference drew hundreds of people and several eminent personalities travelled to the city to be part of a variety of panels. It was inaugurated after Asma Jahangir’s daughter and lawyer, Sulema Jahangir, made an official statement on behalf of their law firm, AGHS, about the expulsion of CPJ’s Steve Butler. “It is against the hospitality of Pakistan. Journalists must be free to practice their profession,” she said.

She recounted her mother’s journey from 1983 for demanding women’s rights and how she along with a group of lawyers organised themselves and wrote bail petitions for poor female prisoners.

Ahsan Bhoon, a Pakistan Bar Council member, spoke on international challenges to human rights, including refugees in Syria and Palestine. Bangladeshi Judge Khatun Sapnara spoke about access to justice and how academics, activists and experts must come together to redefine parameters of law to give practical support to children and women.

Others who spoke at the inaugural session included EU Ambassador Androulla Kaminara,

Supreme Court’s Justice Gulzar Ahmed reminisced about Asma Jahangir and said she was honoured with doctorates from several universities, adding that he believed her legacy would live on.

Senator Musadik Malik held the audience with his speech in a session on ‘Upholding the Rule of Law’. The session was about equity, access to and protection by law and began with Justice Qazi Faez Isa reading out a history of the power corridors in Pakistan with special focus on dictatorship. “Why did no movement ever stick despite several people taking the fall?” questioned Senator Malik. “It is because the only principle that binds our society is that of opportunism.”

Balochistan Bar Council President Manzoor Ahmed Shahwani said articles 8 to 28 were about fundamental rights, but were not freely given by the state and had to be fought for. “Those who say they got power through democratic means are lying,” he said. “Despite other institutions being weak, our political parties have deeply disappointed us.”

MNA Maleeka Bokhari of the PTI said the main reason for the party’s 100-day agenda was to see how many laws they could enact. And all their laws were for the people, she claimed, including women’s property rights, inheritance rights, Zainab Bill, gender-based violence courts etc. She said the PTI campaign was based on rule of law.

Advocate Salman Akram Raja also spoke about constitutional values, while Mr I.A. Rehman said there were too many obstacles to first overcome in order to establish enforcement of law.